About our Renewable Energy work

Our team is dedicated to the building of a decentralized, locally-based renewable energy system in Pennsylvania, one which will bring green energy to all our communities and increase local self-reliance in renewable energy.

Pennsylvania has a pioneering energy history. Our coal miners fueled a world-renowned iron and steel manufacturing industry that brought jobs and prosperity to our state since the 1700’s! The world’s first oil well was drilled in our state in 1859. In 1957, Pennsylvania's Beaver County became home to the first commercial nuclear power plant in the United States. And, as we all know, the recent boom in natural gas drilling and processing has been explosive in our state.

Today, Pennsylvania has the opportunity to leverage our long history as an energy trailblazer by taking leadership in the world’s transition to clean energy. We have the skills, the institutions, the history, and an incredibly resourceful state, which allows us to claim our place as industry leaders… looking to the future, not the past. At the same time, as one of the top three states in greenhouse gas emissions, Pennsylvania must take responsibility to address the climate crisis, which threatens the future for all.

From the early days the captains of the fossil fuel industry have called the shots in Pennsylvania. Many of our politicians have forgotten they serve the citizens of PA and not corporations. The dangers of fracking, including claims of poisoned water and increased rates of cancer, and the danger of pipelines carrying highly explosive gas through Pennsylvania communities have alarmed citizens who have tried in vain to seek the help of our elected leaders. Additionally, by focusing our resources on natural gas extraction, our state runs the risk of being precariously dependent on one industry, putting not only our environment and communities at risk, but also our future economy.

The environmental consequences of burning carbon are clear: we face increasing weather chaos, rising seas, endangered cities and farms, dying wildlife and displaced populations of people and animals fleeing the effects of climate change. And, of course, the follow-on economic impact of all these disasters. We’ve been led to believe that fracked gas is a bridge fuel to renewable energy, yet there is no bridge. It is instead a dead end that is leaving us with continued dependence on fossil fuels well past the time we have available to address this critical challenge. This dependence is accompanied by a debt burden from investment in fracked gas infrastructure that will last for decades.

There is a viable alternative - producing electricity from clean and safe renewable resources such as solar, wind, hydro, biomass and geothermal. Pennsylvanian’s are taking the first steps to produce renewable energy that will someday replace the coal, oil, and gas that has traditionally powered our state. Energy produced by industrial arrays of solar panels and wind turbines is flowing from rural areas to towns and cities. Roof-top solar and geothermal wells are increasing in neighborhoods throughout the region. But change is too slow in coming. With urgency, our policies and investments must be directed full speed ahead to accelerate the growth of renewable energy to power our homes, businesses and vehicles safely and efficiently, as we join the global struggle to avoid climate catastrophe.

Our team is currently researching potential projects to make solar installation more affordable for low-income city and rural communities. We are proponents of legalizing community solar in PA (See Advocate below) and hope to engage in community solar projects once allowable.

Advocate for state and local government policies and legislation that:

Educate and inform the public about ways we can reduce carbons and other greenhouse gases. Continually educate ourselves and share information about the emerging renewable energy industry.

Move money through disinvestment in fossil fuels to reinvestment in local businesses that are helping to build a renewable energy system in Pennsylvania.

Implement energy efficiency measures to reduce waste
Conduct an energy audit of your home or business to identify where heat and air conditioning are escaping. Repair leaks and increase insulation of walls and roof where needed, especially if you are remodeling. Consider replacing windows with double or triple pane.
When appliances wear out, replace with energy efficient models.
Use energy-saving LED lightbulbs.
Paint your roof white to reflect heat.
Turn off lights and appliances when not in use.

Purchase renewable electricity through a locally-owned third party producer.
Buying locally produced energy builds our local self-reliance and keeps capital circulating in our region. Currently, there are two locally-owned residential renewable energy suppliers in PA. Only one, Community Energy is also an energy producer. You can sign up with Community Energy as your third party supplier for renewable energy - solar or wind - if your home or business is served by one of these utilities: PECO, PPL, Duquesne Light, and West Penn Power.

The other local option, serving southeastern PA, is the Energy Co-op, a member owned non-profit that sells renewable energy produced in PA, through their EcoChoice Pennsylvania plan, which is 99% wind and 1% solar. They also have an EcoChoice National.

If you would like to explore out-of-state renewable energy companies to change from your “default” electric supplier, you can go to https://www.papowerswitch.com. Once at the site, you will be led through the steps to evaluate and select a new supplier.  We strongly suggest you “filter” the choices to “Renewable Energy,” “PA Wind,” and “Renewable PA." Contact Brent Groce, Coalition Coordinator, with any questions (click the "Contact Me" button at the bottom of the page).

Sustainable Transportation
Make your next car an electric vehicle. There are a growing number of fast-charge stations and you can plug right into a wall socket at home for an overnight charge.
Walk and ride bikes when possible.
Reduce the carbons of flying by eliminating entertainment trips. Save your carbons for important occasions such as weddings, family reunions, and business that cannot be conducted remotely. We are in a climate emergency and flying is carbon intensive. Plan low-carbon vacations, such as exploring the rural areas of our beautiful state, and surrounding regions. And rural areas would benefit from your vacation dollars.

Roof-top Solar
If your roof is suitable, install rooftop solar, which will save you money, while reducing your carbon foot-print.  Ideally, use a locally owned solar installation company, such as Solar States
or Exact Solar, among others. You can find a local installer anywhere in PA by going to the nonprofit Pennsylvania Solar Center and clicking “Let Us Help You Get Solar”.

Transition to 100% electric homes
When remodeling, consider converting your home or business to 100% electric run, and cut off natural gas. It is so satisfying to call up the gas company and tell them to shut off the gas and end your consumption of this harmful fossil fuel for good! Fracking is decimating our rural and suburban counties at extraction and pipeline sites. When combined with rooftop solar, total energy costs decline.

Use Less
Reduce consumption of all products that you don't need in order to eliminate the energy needed to produce unnecessary goods.

VOTE !!!
There’s really nothing more important than voting for candidates that support confronting the climate challenge.  We need people in Harrisburg (and Washington, DC) that understand the climate crisis and are ready and willing to act to address it. Also, consider contributing to the campaigns of candidates from other districts of our state who are environmental champions and can bring change to Harrisburg. 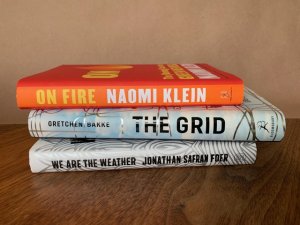 Want to get involved in the Renewable Energy Coalition?